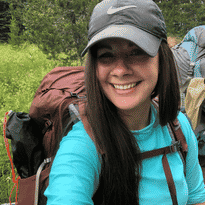 “Brad became enamored with Central Oregon while chasing snow at Mt. Bachelor in the Winter of 1999. Soon after, he relocated to Bend from his home in Southwestern Idaho. Brad is captivated with the water that surrounds the Bend area and enjoys fly fishing the beautiful rivers of Oregon. In his free time, you can often find Brad enjoying the pristine environment of the Metolius River.

Brad came to Deschutes Children’s Foundation in 2022 with a background of non-profit management. He began his career in 2002 with afterschool youth development programs in Central Oregon and Idaho. He finds purpose in helping empower children and families to be healthy and thrive.

Ciaran was born and raised in Western Washington. Prior to joining Deschutes Children’s Foundation, she was an Office Manager for various industries including a geotechnical construction company that helped build the Seattle Seawall and rejuvenate the Waterfront area.

Ciaran moved to Bend in 2017 after meeting her boyfriend on a Mount Bachelor chairlift. They both love to get out in the snow, whether on snowboards or snowshoes. She enjoys taking full advantage of the Central Oregon outdoor lifestyle and can be found on any of the many hiking trails with her Rottweiler, Sage.

She has an Associate’s Degree in Journalism and studied film at the Academy of Art in San Francisco.

Stephanie has a decade of nonprofit experience in Central Oregon. She managed a local before and afterschool program for school-aged youth and worked in development at Bethlehem Inn, a local emergency shelter.

Stephanie joined the team at Deschutes Children’s Foundation in October 2022 where she is honored to continue her work supporting vulnerable children and families in the Central Oregon Community.

Outside of her passion for Deschutes Children’s Foundation, Stephanie is passionate about spending time with her family and participating in all that Central Oregon has to offer. She enjoys backpacking, hiking, and kayaking throughout our beautiful region. Brandy was born and raised in Central Oregon. Prior to joining Deschutes Children’s Foundation, she worked with Boys & Girls Clubs of Central Oregon and Bend for 20 years. She loved being able to serve families and kids in Central Oregon through this organization and its dynamic programs.

In her spare time, Brandy enjoys spending time exploring the outdoors with her family.  She especially enjoys camping, hiking, and spending time in nature. Brandy has a Bachelor of Science Degree in Liberal Studies from Oregon State University.

Growing up in Northern Nevada, the High Desert has always been Robyn’s favorite landscape.  In June of 2015 she made the decision, with her family, to move to the beautiful City of Bend.  Excited, they jumped at the chance of raising their child in such a wholesome, friendly environment.​

When not relaxing at home, you can find Robyn and her family either out on the family farm on Alfalfa Market Road, or off somewhere in the dirt where they enjoy off road racing and dirt bike riding. Tricia was born and raised in Eastern Oregon and moved to La Pine in 1997, after graduating from Stanfield High School. Her love for the nonprofit sector began before she became the facility manager at the La Pine Community Campus. She volunteered for The Hub and HeadStart,  where she received the Volunteer of the Year award for Deschutes and Crook County. Tricia has also earned her 2-year Administration Assistant’s degree online from Portland Community College. In her spare time, Tricia enjoys scrapbooking. Jan Eggleston retired from the position of Executive Director of DCF in 2010, but has recently returned on an interim basis while the Board of Directors searches for the next E.D. She believes in the unique model provided by the organization and the value it offers to the community it serves.
Jan has four grown children and three really smart, cute grandsons. She loves spending time with them and also likes to garden, cook, walk and hike, travel with her favorite companion (and husband), Paul, and read.

Jan was originally with DCF for 15 years. Jennine has lived in Oregon her whole life and Central Oregon has been her home for the last 37 years. She has lived in Sutherlin, Myrtle Point and Pendleton, but Central Oregon always brings her back. Jennine has two children and two grandchildren. In her free time she enjoys camping, hunting and fishing with her husband of 32 years and her dog Abby. Vicki Galusha joined our team on December 20, 2018. Her career background has centered on accounting and auditing with a strong slant toward advocacy and customer service. She has one much-loved son who lives in the Valley. Vicki owns a small farm in La Pine where she cares for her herd of Nigerian Dwarf dairy goats, a mischievous mini horse, several laying hens, two dogs, and a cat. She spends her time caring for her animals, making goats milk soap and cheese, and in the summertime, gardening. Dona Curtis has been Facility Manager at Becky Johnson Community Center for the past 20 years. She strives to make clients comfortable as they come to BJCC for services and is rewarded with comments on how welcoming the building is. Dona spent 10 years as a Camp Fire Boys & Girls Leader and Coordinator for the City of Redmond.

Dona and her husband, Alan, have 5 adult children, 8 grandchildren, and 4 great grandchildren. Crafting ornaments from beautiful designer papers is her most recent hobby along with sewing, quilting and cooking. Spending time with family in her free time is also a priority.

“Being a part of Deschutes Children’s Foundation has kept me involved with children and I enjoy watching kids develop and grow as they attend sessions here. It’s so awesome when a child finally says ‘Good Morning Dona.’ Knowing that I am able to help families that come here with needs is very fulfilling.” Jess joined Deschutes Children’s Foundation in the Fall of 2018. Previously, she was the Membership Director with Marin County Bicycle Coalition, a nonprofit in Marin County, CA. As the Membership Director, she maintained donor engagement, planned and executed community fundraising events, and nurtured a robust volunteer roster. She organized events that brought the bicycling community together and promoted safe and connected pathways within Marin County.

Jess volunteers at Summit High School during track season and at Pacific Crest Middle School during cross country season. She has shared her love of track with the middle schoolers at PCMS since 2017, as an assistant track coach.

In her spare time, Jess enjoys all Bend has to offer from food to outdoor activities. Amy joined Deschutes Children’s Foundation as the Development Director in 2013, and was promoted to Executive Director in 2016. From 2011 – 2013, Amy was a Volunteer Coordinator for The Bloom Project, organizing a daily team to collect donated flowers to be repurposed into fresh arrangements delivered to local hospice patients.

Prior to moving to Bend, Amy worked in Development at the Los Angeles Philharmonic from 2000 to 2008. She was proud to be a key member of the Special Events team that opened Walt Disney Concert Hall to world-wide acclaim in October 2003. Following this accomplishment, she was promoted to Board Development Officer where she served as the primary steward for the Board of Directors and a major donor group, the Board of Overseers. Amy believes that dedicated people are the heart of a successful organization and honors each individual for their generosity and contribution.

In her spare time, Amy enjoys reading, gardening, and spending time outdoors with her family.